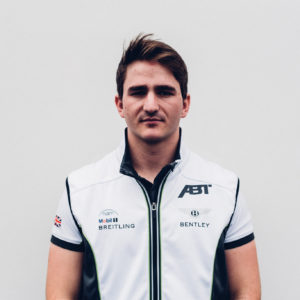 Jordan Pepper is a Young South African Racing Driver who has been participating in motorsport since 2001. From a very young age, he set himself a goal to become a Professional Racing Driver. 2017 season has seen Jordan finally make that goal a reality, when he was selected as 1 of the official Bentley Team Abt Drivers for the Nurburgring 24hrs Factory supported programme. He went on to stand on the podium at the opening VLN championship Round which was used as preparation by all manufacturers for the 24hr Race. However luck wasn’t on their side as they were forced to retire early on in the race.

2015, Jordan Pepper Made his GT Racing Debut in the highly competitive ADAC GT Masters, in an Audi R8. After a very Impressive First year, getting multiple podiums and 1 Win, he Looked to build on his performance and experience in 2016 and lead to him signing a deal with the newly formed Bentley Team Abt. Although the overall results didn’t show due to Jordan competing with the series defending Am Champion, Jordan was able to prove himself as one of the team’s leading drivers from the start of the season, which lead to him making a switch to one of the full Pro line up Bentley Continental GT3 cars, and delivering straight away, Picking up the teams Only Pole position of the season and scoring a P2 at the same Event.

From a very young age Jordan has had one major goal in life and that is to become a Professional Racing Driver and compete at the highest level possible. He has dedicated his life to achieving this goal and has achieved highly in every discipline he has raced in.

He started Racing at the tender age of 4 in Go-Karting, in his home country South Africa. He Competed in Go-Karts from 2000 until 2011, and was always fighting at the highest level. His Greatest achievement was 5th in Junior Rok at Rok World Finals held in, Lanato Italy, alongside all his Achievements back home in South Africa.

In 2012 Jordan Switched to Cars at the tender age of 15, Finishing 3rd in VW Polo Cup South Africa and winning the rookie championship in his maiden year in South Africa’s Toughest 1 make Championship. He Moved on to Scirocco R-Cup for 2013 and 2014, which was a support series to the DTM, He Managed to finish 3rd in 2013 whilst winning the Junior Championship and in  2014 he went 2 better and Finished 1st overall, Claiming 7/10 Poles, 6/10 Wins, 9/10 Podiums with his worst result of 5th.

Jordan earned himself a spot on the FIA Young Driver excellence Program lead by Alex Wurz, this was a great achievement to be 1 of 10 Drivers to make the academy and be the only driver from Africa to make the academy, and unfortunately he just lost out to Jordan King( GP2 star and Manor F1 reserve driver ) in the end.

Jordan is very passionate about motorsport and has dedicated his life to the sport. He is really determined and dedicated to achieve at the highest level possible, and is always willing to learn and take advice from the people around him within the sport.

Next event starts in